CMS has posted the MAC proposed pricing on its website, here.  Download the link there marked "2016 Gapfill CLFS."  CMS is accepting comments until July 10, 2016 ...revised by CMS to August 10, 2016.   CMS will post final MAC price revisions around September 1.

I have also posted the CMS Excel spreadsheet in the cloud,  here. 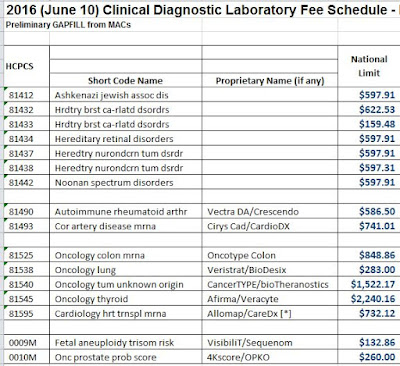 The full log of the Gapfill process is difficult to reconstruct from the data provided by CMS.  For example, there is no rationale or logic whatever provided by CMS or the MACs to explain the pricing tables posted by CMS.

I rearranged the spreadsheet to show pricing by MAC jurisdiction, which is at least slightly more manageable than pricing by all 57 CLFS zones.

That "manipulated" spreadsheet I put together is in the cloud, here.  Some screen shots below (click to enlarge).

[NOTE: On June 14, CMS corrected some errors in the WPS information that created inconsistencies with other "MolDX MACs."  I am traveling overseas and have not had time to correct this blog. The CMS change only revised screenshots and comments regarding variance of WPS prices from MolDX prices.]

Pricing by MAC, above, I have rearranged the columns to show in the left columns the MACs that generally price according to the Palmetto MolDX lead price (Palmetto, Noridian, CGS, WPS).  Note the column "% of MolDX Price."

In the upper rows, the germline gene panel tests generally priced at the MolDX price (e.g. 100% of MolDX) except for the add-on code 81438 for dup/del of hereditary neuroendocrine disorder gene panels.  MolDX priced this at $152 while other MACs generally priced the same as the underlying gene panel (circa $600).  On its own website, MolDx has sometimes listed the price of dup/del add on sequencing as "0" but it submitted prices as Palmetto, here.


Pricing as Percent of the MolDX Price

Here, all the prices are converted from dollars to a percent of the Palmetto MolDX price.

Interestingly, not all "MolDX" MACs had exactly the same prices.  Noridian was 2% higher for 81490, VectraDA/Crescendo.  That is trivial, but WPS was notably higher for 81538, Veristrat/Biodesix; a little higher for 81540, CancerTYPE/bioTheranostics; and a third lower than MolDX for 81545, Afirma/Veracyte.  CGS always matched MolDX (Palmetto) exactly.

As noted previously, we see again that the non-MolDX MACs were sharply higher for the 81438 dup/del code, by matching it to the parent sequencing code 81437.

However, the non MolDX MACs were sharply lower than MolDX for the MAAA tests.

Cahaba, FCSO, and Novitas generally moved as a bloc with identical submissions, and NGS pricing circled these at a distance.

While NGS was always closer to this bloc than to MolDX, NGS varied somewhat from Cahaba/FCSO/Novitas.  For example, NGS priced 81432 and 81434 almost twice as high as either the MolDX MACs or the "bloc" of non-MolDX MACs.


MAC Prices as Percent of the CMS "Natl Limit"
\

It's not clear exactly how CMS calculated the "National Limit" price column.  It should be the "median" price of the MACs by on the text of the applicable regulation which calls out "contractor" not "CLFS zone" as the relevant measure, and in PAMA 216 rulemaking, CMS will update the terminology to "MAC" which supercedes "contractor."   But...last fall, in publishing final gapfill prices in November, CMS posted a spreadsheet that showed it had used an Excel "median" function across the 57 CLFS zones.

Normally, the median is a fairly robust number, insensitive to changes in high and low outliers.  But here, where there are large blocks of about half-and-half, either high and low prices, which are sharply different, as here, the median becomes an unstable metric.  It will jump between the higher price bloc or the lower price bloc -- based on a change in just one pricing proposal at one MAC.

Cahaba as the Swing Vote

When presented this way, Cahaba takes the position of the "swing vote" because it matches both the MolDX price and the calculated CMS price for the germline code, while it matches the "low priced MAAA" bloc in the following rows, and in doing so, Cahaba continues to match the calculated CMS price.  This is the definition of a swing vote.  While any MAC could become a "swing vote" when there is a divide like this, Cahaba is different because it actually (roughly) matched MolDX in the germline codes while matching the other non MolDX MACs in the MAAA codes. No other MAC has as many "white" cells in the table above, showing that Cahaba matched the final CMS price more often than any other MAC.  As Cahaba goes, so goes the nation CLFS.

The MolDX pricing block has, by my count, six MACs, 25 states, and 28 CLFS zones.  (The MACs are two Noridian, two WPS, CGS, Palmetto)   The Non-MolDX pricing block has six MACs, 25 states plus DC plus Puerto Rico (27), and 29 CLFS zones.  Therefore, if you count the median by "MAC" it would fall between the two clusters of six MACs; if you count median by state or by CLFS zones, the non-MolDX bloc wins by a hair.

As I mentioned earlier, I believe the most literal reading of the regulation would count median "of the MACs," e.g. of the twelve MACs.  Most sources state that to calculate the median of an even number of samples, take the average of the central pair.  However, in the past CMS has seemed to use the median of the 57 CLFS zones shown in its online spreadsheet.

Where MACs were under one umbrella ownership (CGS, MolDX) and (Novitas, FCSO), they priced identically.


A note on decimals.

Since there is no rationale for the pricing provided, it is difficult to know how MACs got penny-level pricing; it's rare that prices are an even dollar value estimate.