Over the last few days, many articles are blogs have appeared on a March 1, 2016 Supreme Court (SCOTUS) decision, Gobeille v Liberty Mutual Insurance Company.   The case decided that a Vermont law requiring claims data from "all payers" violated a federal law called ERISA, that generally shields employer-self-insured plans from state regulation.   The case has some interesting implications for big data in health care, and attracted a 102 page amicus curiae filing from the U.S. government.  Details after the break.

The most user friendly archival site for information on the case is ScotusBlog, here.  The Supreme Court's decision is here.   The next most-interesting document is the U.S. Government's filing, 102 pp, here.

Around 1999, I took a law school policy class as part of a healthcare MBA, and was introduced to ERISA.   This 1974 law (here) generally shields multi state employers from state regulatory actions on their "employee benefits" such as retirement funds, transferring oversight to the federal government and providing remedies for grievances in the federal rather than state courts.   However, the law carves out "insurance plans" which are still regulated by states.  However, most large employers provide "self insured" insurance (with administrative services by BCBS or another payer) which are not, technically, "insurance."   In short, if an employer buys you an Iowa BCBS plan, it is under state law, but if the employer is self-insured, and Iowa BCBS just administers the claim processing, it is regulated by ERISA as an "employee benefit."  For example, if Iowa law were to require chiropractor coverage, it would apply to the former situation but not the latter.  Helped by ERISA, a large employer (say, Ford or GM) can provide national health benefits without worrying about 50 state laws about every feature of them.

Vermont has a law requiring the creation of an all-payer database to assess public health needs and issues in Vermont.   This is not unique to Vermont; according to a brief from the National Governors Association at least 17 other states are doing this (Decision, p 2, citing Brief for New York State; Ginsburg dissent, page 2, fn 1; see also the Governors filing, here.)     There is an "All Payer Claims Database Council" that promotes uniform data standards for this endeavor.   Around 2008/2009, the American Reinvestment and Recovery Act providing funding for research and pilots on this topic.  (For multiple links and white papers, see here at Google).

Liberty Mutual happens to be a defendent here, but not as an insurance plan.  It is simply an employer who has a self-insured benefit program (carried out in part by BCBS Massachusetts for certain Liberty employees living in Vermont).  Therefore, it argues that BCBS should not have to give Vermont any data on Liberty employees, since the self insured plan data is exempt from state law compliance under ERISA.

Notably, Liberty has triggered variable responses from judges confronted with the case.  At the initial federal court level, the judge rules in favor of Vermont - submission of electronic claims files already stored in computers did not meaningfully interfere with a company running a national benefits plan.  At the appeals level, one judge agreed (favoring Vermont) but two ruled that ERISA blocked Vermont's effort.   At the Supreme Court, of the eight current justices, only two dissented (supporting Vermont).  However, Justice Thomas wrote a concurring opinion that this decision according with precedent (stare decisis) but that the precedent drifts too far from the text of the law [*].  Had he survived for this opinion, Justice Scalia likely would have concurred.   Justice Breyer concurred (blocking Vermont) but noted that the Department of Labor had authority under ERISA to collect the data itself for the U.S. and redistribute the data to Vermont, therefore his vote against Vermont need not impede the national roll-out of comprehensive all payer data collection.   In a dissent, two justices (Ginsburg and Sotomayor) found (as did the initial federal judge) that Vermont's request did not meaningfully burden or interfere with Liberty Mutual's benefits, and that transferring existing data electronically was not a cumbersome imposition.  Writing, "Entirely overlooked [by the majority]...is the technological capacity for efficient computer bawed data storage, formatting, and submission."

In Justice Breyer's opinion, page 2, he quotes the U.S. brief as stating that the Departments of Labor, HHS, and Treasury "are currently considering rulemaking to require [ERISA] health plans to report more detailed information about various aspects of plan administration, such as enrollment, claims processing, and benefit offerings."  Breyer notes that ERISA plans might be required to report this data under both ERISA law and under a section of the Affordable Care Act. 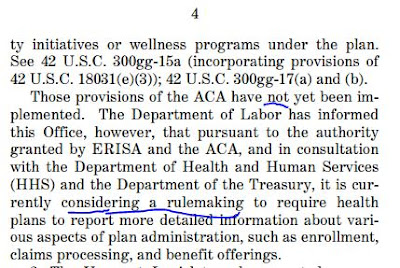 Big Data Should Be Complete Data

In her dissent, Justice Ginsburg notes that half of employer health insurance is self-insured by the employer, and this is true for 20% of the insurance in Vermont (Ginsburg, p. 4).  She concludes that "stopping States from collecting claims data from self insured employer health care plans would thus hugely undermine the reporting regimes on which Vermont and other States depend to maintain and improve the quality, and hold down the cost, of health care services."