Traditionally, Medicare and other payers compensate doctors for unavoidable wastage from single dose vials.   For example, the patient needs 80 mg of drug but only vials of 100 mg are sold. Single use vials are labeled "not for reuse" and generally do not contain preservatives for refrigeration and reuse.  In other cases, components may be brought up from powder to saline and not be stable in liquid form.

Peter Bach of Memorial Sloane Kettering published an article on the national mathematics of this in the BMJ (British Medical Journal) and it was immediately picked up by the New York Times.  Links follow. 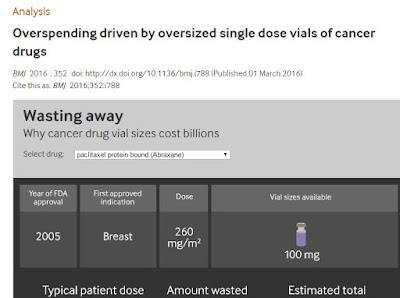 Bach's article is online and open access at BMJ (here) while a detailed story appeared in the weekly Tuesday health section of the New York Times (here).  The web version has a catchy live-interactive section with pull-down boxes that calculates in front of your eyes.

What caught my eye, and what I pointed out to some junior colleagues in consulting, adding relatively straightforward, high school sophomore level math makes the story newsworthy.  Simple describing what is wasted - 100 mg vials here, 80 mg drug needed there - isn't a news story.  Doing the math and multiplying out to expected patients per year times published Medicare drug prices plus total costs is not rocket science, but makes the story a news story for the New York Times and a publication for the BMJ.  The spark is having the general idea, then a quick forward looking vision to how the math would stack up, and then "doing it and getting it done."

Update
According to subscription journal Law360, Sen. Angus King of Maine, Sen. Bernie Sanders, and Sen. Durbin of Illinois, together with some other Democratic senators sent a letter about Bach's article to both the FDA and CMS.