Medicare has very few national policies for coverage that are predicated on racial background.  One is the glaucoma screening benefit, which is specialized for individuals who are African American and 50 or older, or Hispanic American and 65 and older (here).  Medicare is silent on questions like how this is defined or how mixed-background individuals are coverd.  And for example, individuals from Egypt or Dutch background South Africa are from the continent of "Africa" and now live in "America" but the coverage is silent on how their benefits would be handled.

There is no national policy that is specialized for individuals of Ashkenazi descent, but there are draft local coverage policies that would guide BRCA testing for individuals with different backgrounds.  While these have statistical bases, they also raise challenging implementation questions.


The Jurisdiction E (CA, NV, HI) and Jurisdiction F (Northwest & Mountain states) proposed draft policies for BRCA test coverage in summer 2015, with comment periods closing August 10.  These were policies DL36161 and DL36163, which are identical.   A similar, but edited, policy was released this fall in Jurisdiction M (NC SC VA WV).  A redline version of the fall East Coast draft policy (overlaid on the prior summer West Coast draft policy) is in the cloud, here. 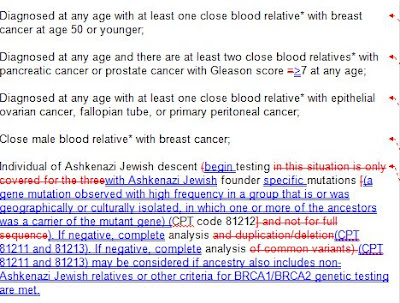 Individual of Ashkenazi Jewish descent (testing in this situation is only covered for the three founder mutations [CPT code 81212] and not for full sequence analysis and duplication/deletion analysis of common variants).

The fall East Coast version was updated as follows:


Individual of Ashkenazi Jewish descent begin testing with Ashkenazi Jewish founder specific mutations (a gene mutation observed with high frequency in a group that is or was geographically or culturally isolated, in which one or more of the ancestors was a carrier of the mutant gene) (CPT code 81212). If negative, complete analysis (CPT 81211 and 81213). If negative, complete analysis (CPT 81211 and 81213) may be considered if ancestry also includes non-Ashkenazi Jewish relatives or other criteria for BRCA1/BRCA2 genetic testing are met.

While the criteria reflect guidelines referenced by the Medicare program, in the context of laboratory compliance, audits, and legal investigations that labs are subject to, the restrictions become more problematic.   If a doctor orders full BRCA sequence testing, does the lab need to confirm the patient is "not Ashkenazi?"   How would it do so?  On every case?  Or selectively?   How would the lab staff validate the patient's Ashkenazi versus non Ashkenazi relatives?  (For an article on conflicting science on Ashkenazim genetics, here.)

Medicare policy holds that labs are responsible for implementing Medicare policies and only submitting payable claims, even if the doctor has submitted test orders that Medicare views as excessive.   In BRCA sequencing cases, under this LCD, where the payability of the claim upon audit necessarily hinges on the patient's Ashkenazi status, it is difficult to see what the Medicare auditor's role, or the lab's role, or an Administrative Law Judge's role, would be in these cases.  (Although it's hypothetical, a crazy enough or tightass enough auditor could say each initial BRCA full sequencing claim is payable only if verified that the patient is "not" Ashkenazi, and thus require that non-Ashkenazi status to be documented "in the medical record."  It would be crazy, but I've seen auditors assert full-blown crazy positions in the past.)

These points may seem nerdy, but they reflect the difference between a clinical guideline and a federal payer policy subject to DOJ investigations by overeager attorneys or by auditors at RACs.  The guideline on Ashkenazi heritage, as written by NCCN, is intended for interpretation between a clinician and his/her patient.  Once Ashkenazi heritage becomes part of a federal policy, which some auditors might implement legalistically, the lack of clear definitions becomes more problematic.

Footnote.
For a book with a large section on the history of implementing ethnic/racial classifications in law and regulation, see here.
For a January 2016 article on differential screening protocols when special populations are involved, see Foulkes WD et al. (2016) Population genetic testing for cancer susceptibility. Nat Rev Clin Oncol 13:41-54. here.