The House has posted a two hour, twenty minute video on the November 17, 2015 hearing, "Examining the Regulation of Diagnostic Tests and Laboratory Operations."  Here. 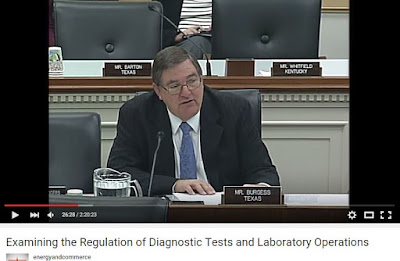 Congr. Burgess of Texas, a physician, remembers that he was "not a fan" of CLIA '88 when it came to govern his physician office laboratory in 1988.[*]   However, he feels today that CLIA can clearly be approved.  He discussed the Administrative Procedures Act - that "this is not coming through the normal regulatory process" but will be issued "at the end of this year, like it or not."  He adds, "I still retain that romantic notion that our government exists with the consent of the governed...that would not include issuing guidances and fiats." [minute 27]

For his side, Dr. Shuren discussed problems with the proposed House legislation (to create a new FDA diagnostics center with new rules and standards).  He described a University of Texas study where samples from 105 cancer patients were sent to to labs with 50% disagreement in the results. [at 1 hr 9 min].  He was concerned that "enhanced CLIA" proposals would perpetuate and worsen a "bifurcated system."  [minute 35].  Today, there is a bifurcated system "where on one side of the street, a test is regulated by FDA, on the other side of the street, by CLIA, and the people being put at risk are patients." [minute 42].  Shuren emphasized multiple times that enhanced CLIA (with clinical validity review on the CLIA side) which only make the "bifurcated system" issue worse, not better. 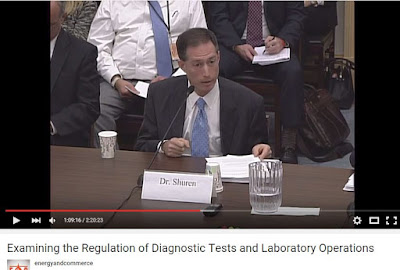 Patrick Conway, Chief Medical Officer of CMS, discussed CLIA.  He repeatedly answered questions by describing CLIA as:  monitoring lab protocols, equipment, and staff training, with 25 CMS central employers and 100 field staff, mostly former lab techs, and seven deemed certification bodies.  In response to many questions, he stuck closely to repeating those talking points.   He stated that FDA has a "critical role" in determining clinical validity.  [37 minutes].   "FDA and CMS can work together, FDA assessing premarket clinical validity and CMS enforcing laboratory standards."  [41 minutes].  He strongly discouraged suggestions that clinical validity be added to the CLIA system, since the staff and system were not prepared for it.

__
An FDA white paper on 20 case studies of bad LDTs is archived in the cloud here.  It is one an FDA active website, apparently, in early 2018, here, but the PDF link goes to a "wayback archive" webfile.