On Thursday, September 30, two Medicare MAC contractors issued proposed LCDs for the field on next generation sequencing in oncology.  See also a footnote discussing similar coverage at United and Aetna.


The first, DL36446, with a comment period until December 22, 2015, applies to claims coming from laboratories in the states of Alabama, Georgia, and Tennessee (the Cahaba contractor) and is online here.  Comments can be addressed to LCDComment@cahabagba.com  .   Cahaba will hold an open public meeting where this (or other) LCDs can be discussed, on November 4.

The second, DL36376, with a comment period until December 12, 2015,  was released by the NGS (National Government Services MAC, herein NGS-MAC) for IL-MN-WI and for New York/New England and is online here (IL) or here (NY).  Comments can be address to PartBLCDComments@anthem.com .

In an open blog at the oncology trade journal website The Cancer Letter, Dr. Dane Dickson has a blog that raises his concern about the amount of variety reflected in the coverage and analytic validity requirements of the several MACs' LCDs.  His blog is online here.

The Cahaba and NGS LCDs are newly issued drafts.  The MolDX LCD was finalized on May 22, 2015 (here).   On the commercial side, United Healthcare recently issued a policy on next-gen testing in lung cancer, which became effective on October 1 (here).

The test policy notes NCCN guidelines and directs laboratories to use testing "represented by CPT 81445" which covers 5-50 genes in solid tumors.  The LCD states:  "The NCCN NSCLC Panel “strongly endorses broader molecular profiling to identify rare driver mutations using multiplex/NGS to ensure that patients receive the most appropriate treatment” The testing is specific to several circumstances:

I read the policy several times and rather than paraphrase it, I quote it as:


This policy provides limited coverage for partial genomic profiling on new specimen tumor tissue-only for patients with initial testing (of a previous specimen) done by an FDA-approved companion diagnostic (CDx) or by a laboratory developed test (LDT) for these genomic alterations. Alterations detected by partial genome profiling, if positive, may allow individuals to be treated with a targeted therapy for which they were previously not treated, or for newer targeted therapy (in patients previously treated).
Partial genome profiling / NGS is defined as a single test using tumor tissue only (i.e., not matched tumor and normal) that does not distinguish between somatic and germline alterations and can detect the following classes of alterations:

The alterations are base pair substitutions, indels, copy number variations, and translocations.  Patient must have Stage IIIB-IV lung cancer and had previous "CDX or LDT"specific gene testing on a prior pathology specimen.

While Palmetto's MOLDX policy intentionally requires a prior FDA or LDT single gene test which is NEGATIVE before advancing to panel sequencing, the Cahaba MAC LCD only appears to require that prior FDA or LDT testing of single genes BE DONE (without remark on the result).

ARE LCD REQUIREMENTS AT ODDS WITH PRICING?

First, let me emphasize I have no information on theories or data used to price these codes other than the public Excel spreadsheets released by CMS, plus access to CMS pricing rules and access to the AMA CPT code terms.

On September 25, CMS released final MAC gapfill prices for genomic sequencing procedure codes that were new for CY2015 (see here).   Among these codes is 81445, with a gapfill price of $597.31.   The proposed pricing for this code was $90.00 in the three Cahaba states (AL GA TN) and $597.31 in the four Palmetto states (NC SC VA WV).   CMS set the price at the median of the seven states, $597, which was considerably lower than the couple-thousand dollar price for sequencing 5-50 genes under code 81445 that was proposed by the Association of Molecular Pathologists (the AMP; here).

While MACs set prices by a method they see fit, under some generalistic guidance from CMS, it is difficult to conjecture what rationale led Cahaba to price this code at $90.

The pricing by Palmetto could be sylted as consistent with the minimal work required to qualify for 81445, which would be to test for hot spots in 5 genes, and that work might price at around 5 x $120.  This is only a hypothesis based on the public result.  AMA CPT created a code that seemingly could have as little work as hotspots by any method in 5 genes, or as much work as 50 genes with full high depth sequencing and indels analysis and copy number variation.  If so, the MAC seems to have priced towards the least work that would qualify for the wording of AMA CPT code 81445.

I raise the issue because the NGS and Cahaba LCDs, quoting NCCN guidelines, seem to be intended for laboratory tests that undertake full sequencing of 5-50 genes, but the pricing seems to be set for a lab that does limited hotspot testing of 5 genes.   I can only guess, however, since the spreadsheet for gapfill price is mute except for the final price.

Given that there were exactly two MACs reporting for 81445, some mathematical reference sources (including the Wikipedia definition of "median" for even samples, but also other sources including the Excel median function) would define the median as the middle number in an odd numbered series or else as the average of the two numbers that are in the middle of an even-numbered series (here, "2" MACs reporting gapfill for 81445).  CMS has calculated "median" based on the number of states tallied up across the pair of MACs. Since there were four $597 Palmetto states reported and three $90 Cahaba states reported, the median number is a Palmetto state and is $597.

United Healthcare updated its policy effective October 1, 2015, covering gene panel tests in certain lung cancer patients with the additional requirement the test must be NYS approved.  (United, as of 11/8/2015).

In November 2015, Foundation Medicine stated on its quarterly earnings call there there is clear progress in reimbursement, but also concerns.  While not laid out in black and white, one of the concerns was likely the tendency in some of the policies to reference the 5-50 gene CPT code (which CMS has priced at around $600) as the vehicle through which coverage would be implemented. 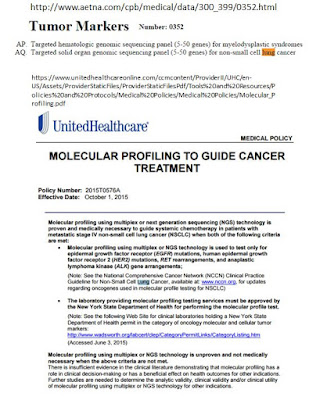