In January 2015, the Medicare MolDX program published a draft coverage determination for comprehensive genomic profiling (CGP) in lung cancer patients if initial genetic tests had failed to find mutations for EGFR or ALK.   See earlier coverage, here.  The policy covered first-line CGP testing but only in non- and light-smokers.

MoLDX has finalized the LCD with minimal changes, with a 45-day effective date of July 6, 2015.  The final (future effective) version is here. 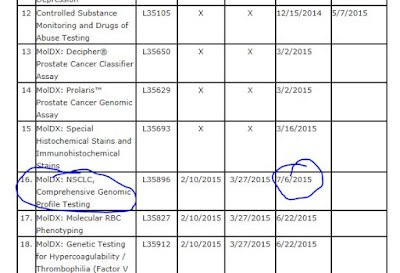 Some details and a redline comparison after the break.


Redline of the Final LCD
I ran a redline of the draft and final LCD, available in the cloud here and the documents used for before/after comparison are archived here.

Tumor Testing Only
The finalized LCD covers tumor testing only, not germline.   Whether germline testing should be de rigeur has recently been in the news (here, here).   The LCD states, however, that "CGP analysis is defined as a single test using tumor tissue only (i.e. not matched tumor and normal) that does not distinguish between somatic and germline mutations."

ROS-1 Added to Initial Test Round
The initial round of testing should now include not only EGFR and EML-ALK testing but also ROS1 testing; only when the patient has none of these mutations (and most patients won't have them), is CGP covered.

CGP Must Cover Four Classes of Mutation; CGP Test Must be Reviewed & Approved
CGP must cover four classes of mutation, starting with base pair substitutions, indels (now defined as up to 70, not 40, bp), copy number variations (now defined as both amplification and deletion), and translocations.  The platform may be "NGS" or may be "other non-NGS" platforms that meet these performance criteria.   In addition, CGP tests covered by the policy must be individually approved by MolDX for meeting analytical validity criteria (not new).

Data the Lab Shall Report
The test laboratory must confirm that prior negative testing had occured for EGFR, ALK, and ROS1, and what methodology had been used; report de-indentified data every six months, but with age and gender; the type of biopsy (metastasis, original specimen, repeat biopsy, etc); the "response status and duration of response" is to be reported [this seems to commit the laboratory to an open-ended duration of follow-up.]   While a specific number of CGP genes is not specified, alternations in ALK, BRAF, EGFR, HER2, KRAS, MET, ROS1 and RET must be reporting, suggesting this is an 8-gene minimum set of CGP genes.

Patient consent?
An open-ended question is what would happen to a patient who wanted testing, and whose doctor felt testing was medically necessary, but the patient and family did not want their genomic data entered into a Medicare contractor data archive.  Or if a patient later withdrew permission for data use, after the test had been conducted and paid for.  Or is it more like a "certificate of medical need" such as used in DME, or a validation for hospice care, where patient information is transmitted to the payer but patient consent isn't really needed?

This policy provides limited coverage for comprehensive somatic genomic profiling on tumor tissue-only (hereafter called CGP) for patients with metastatic non-small cell lung cancer (NSCLC) who are lifetime non-smokers (also known as never-smokers) or former light smokers (=15 pack year history) and who tested negative for epidermal growth factor receptor (EGFR) mutations, EML4-ALK rearrangements, and ROS1 rearrangements when initial testing was done by an FDA-approved companion diagnostic (CDx) or by a laboratory developed test (LDT) for these genomic alterations. Alterations detected by CGP, if positive, may allow individuals to be treated with a targeted therapy for which they were previously ineligible. At the current time, CGP for germline (i.e. inheritable) mutations is not a Medicare benefit.

It is estimated that more than 220,000 new cases of lung cancer will be diagnosed in the United States (US) this year. This represents roughly 13% of all new cancer diagnoses, and 27% of cancer deaths. Sadly, the estimated 5-year survival rate for all lung cancer patients is 17%, and only 4% for patients with metastatic disease.

The pathophysiological development of lung cancer is complicated, with several known genomic alterations found individually or in combination in many patients. These alterations may be due to toxic exposure or underlying genetic factors, and not all alterations have the same impact on disease development or prognosis. Some alterations appear to be integral to the transformation and ongoing growth of the tumor (driver mutations). Among the best studied in this class are point alterations and indels in EGFR and EML4-ALK translocations. EGFR mutated NSCLC is found in up to 15% of all lung cancers in the US. These mutations convey a more favorable prognosis and allow treatment with oral EGFR inhibitors such as erlotinib, gefitinib, or afatinib. Similarly, translocations of ALK and EML4 or other less common fusion partners occur in approximately 4% of all NSCLC patients and permit treatment with oral ALK-targeted inhibitors such as crizotinib and ceritinib.

The majority of NSCLC cases are diagnosed in patients with a smoking history. Lifetime non-smokers or light former smokers (=15 pack years) have different disease compared to their heavier smoking counterparts. Sequencing of tumor specimens in never-smokers has shown a higher mutation frequency of EGFR than smokers, with some non-smoking ethnic groups such as Asian women having a much higher mutation frequency than their Caucasian counterparts. Similar results have been shown with ALK translocations. For example, in one study involving never-smokers or light smokers with adenocarcinoma of the lung, 22% of patients’ tumors harbored an ALK. When EGFR mutation carriers were excluded, 33% of patients had an ALK translocation. While ALK translocations and EGFR mutations certainly occur at a meaningful frequency in former smokers with more significant history of cigarette use, use of the enrichment approach described herein may allow a more efficient completion of this initial phase of study.

Currently, a variety of different techniques are used to test for these genomic alterations in tumor specimens including three FDA cleared/approved CDx tests for NSCLC to determine if a patient is a candidate for targeted therapy. For EGFR, there is the Cobas® EGFR Mutation Test for erlotinib and Therascreen EGFR RCQ PCR Kit for afatinib. For ALK, there is the Vysis ALK Break Apart FISH Probe Kit for crizotinib. These tests look at specific regions in the target gene to determine if the genomic alteration of interest is present.

In addition to these FDA-approved CDx test, there are a variety of laboratory-developed tests (LDTs) that are used to identify EGFR mutations and ALK translocations. These include bidirectional Sanger sequencing, direct DNA sequencing, hybridization sequencing, pyrosequencing and sequencing by denaturation to name a few. Some of these LDTs provide more extensive genetic analysis than their FDA-approved counterparts, but there are few head-to-head comparison studies demonstrating greater diagnostic accuracy or clinical utility of the various approaches.

For various reasons, CDx or LDT sequencing techniques may miss deleterious EGFR mutations and ALK translocations. For example, alterations may occur outside the sequenced region or involve complex alterations (e.g. insertions or deletions (indels), copy number alterations, or translocations) that are not detectable by the specific test. Newer techniques such as massively parallel sequencing, also known as next generation sequencing (NGS), offer the possibility of not only increased analytical sensitivity but also the ability to detect a broader range of genomic alterations than existing CDx and LDT techniques.

In a recent study by Drilon, lifetime non-smokers or light smokers who tested negative for alterations in various target genes (including EGFR and ALK) in a broad “focused panel of a variety of non-NGS” tests developed at a major academic institution were studied using a specific type of NGS, namely CGP. Despite robust non-NGS (and CGP) testing using multiple techniques, CGP testing identified EGFR mutations in 7% more patients than had been identified by prior combined methodologies, and 6% more ALK translocations than by previous FISH analysis. Although some of the EGFR mutated malignancies found by NGS are less likely to respond to available EGFR tyrosine kinase inhibitors (TKIs) (e.g. exon 20 insertions), others such as complex double mutations and exon 18 mutations (which are typically undetectable with so-called “hotspot” panels), are likely to benefit from targeted therapy. CGP analysis was equally compelling for ALK translocations. In two patients, where FISH analysis was clearly negative, translocations were identified using CGP. These patients would likely benefit from treatment with crizotinib.

Although the study population is small, the significant number of potentially actionable genomic alterations that were missed by non-NGS methodologies is compelling, and demonstrates that CGP can identify a group of non- small cell lung cancer patients who are likely to benefit from targeted therapy.

CGP analysis is defined as a single test using tumor tissue only (i.e., not matched tumor and normal) that does not distinguish between somatic and germline alterations and can detect the following classes of alterations:

Other non-NGS testing platforms may be considered if they can similarly detect all four classes of alterations with comparable test performance as CGP.

CGP analysis is covered only when the following conditions are met:

·         Patient has been diagnosed with advanced (Stage IIIB or IV) NSCLC; and

·         Patient is a lifetime non-smoker or former light smoker with =15 pack year history of smoking; and

·         Testing is performed by a lab that satisfies Palmetto GBA’s published AV criteria.

·         Prior to CGP testing, verify that each patient has previously tested negative for EGFR mutations, ALK
rearrangements, and ROS1 rearrangements

·         Report the following to MolDX every six months on an individual patient basis but de-identified (i.e., no protected health information):

o    Patient demographics including patient age when the specimen was collected, and gender;

o    Any treatment received after CGP testing, the current response status and duration of response

·         Reports will be delivered in
every 6 months in a mutually acceptable format.

_____________________To discuss how the changing healthcare system and Medicare policy affects your company, association, or investments, contact Dr Quinn through FaegreBD Consulting.