According to the trade journal Gray Sheet (subscription; here), on November 17, 2015, the House will hold a hearing on a legislative reform that would create a new body of FDA statute for diagnostic tests.  Draft legislation is offered for discussion, and tracks pretty closely to the Spring 2015 DTWG FDA Reform proposal.

* The House legislative proposal is up at the House.gov website, here. *
My November blog on the November hearing, here.

The legislative proposal is very similar in concept to a white paper proposal for major FDA reform developed in Spring 2015 by the Diagnostic Test Working Group (DTWG).  That white paper has been posted at the Hyman Phelps FDA blog website since April 16, 2015.  Here.  Genomeweb updated its readers on the DTWG topic in June, here.  Stating in part:  "While there are significant differences of opinion about FDA’s proposed approach, the draft guidance has clearly served as a catalyst for broader conversations about what a modern regulatory framework for these unique and evolving tests and services should entail."

For subscribers, Gray Sheet compares the House legislative draft, the DTWG proposal aka white paper, and the recent AMP proposal for enhanced CLIA.

At 32,000 words, the legislative draft currently up on the House website for the November 2015 hearing is about twice as long as an early legislative version circulated for comment in June.  But the preamble has not changed a word:

To establish a regulatory framework for in vitro clinical tests that advancesinnovation for patient benefit, protects patients, provides a predictableand timely path to market, ensures reasonable risk-based regulation,avoids duplicative regulation, advances precision medicine, and appliesthe same regulatory principles to the same activity regardless of entitytype, and for other purposes.


A critical first step in the legislation in an inserted phrase that excludes "in vitro clinical test" from the definition of a medical device at in the FFDCA, at 201(h).

As discussed in the Hyman Phelps blog from April, at that point a new regulatory scheme is elaborated that brings LDTs under FDA regulation but in an original way that is likely quite a bit less onerous that the PMA process for devices today. 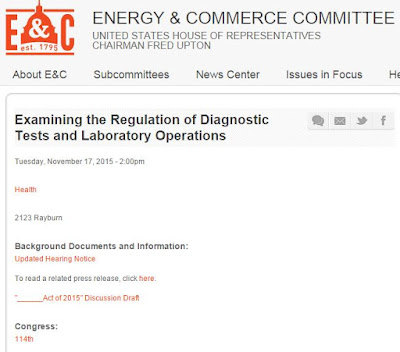 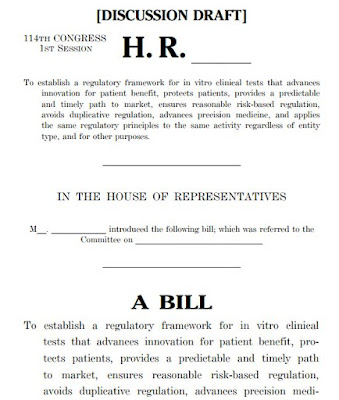