On October 27, 2015, the American College of Medical Genetics issued a press release that it had joined AMA and a broader coalition in supporting an "Enhanced CLIA" approach to LDT regulation.

While there has been some discussion of CAP and AMP producing somewhat different versions of an enhanced CLIA paradigm in recent months, the letter is signed by the AMA (including CAP), and by the AMP.  (Genomeweb, subscription, here.)

The joint letter to both House and Senate, dated October 26, 2015, is online here.  ACMG's news release, which discusses both the two page consensus letter to the Hill and provides a number of helpful ACMG-specific links, is here.

The position goes beyond the historical position that CLIA was OK or could be fixed by minor adjustments, and state that there is a flat-out need for Congressional action on CLIA to address high complexity tests.

We stand united in support of modernizing the oversight framework for high complexity clinical laboratory developed testing services and procedures primarily through reform of the Clinical Laboratory Improvement Amendments (CLIA).

We agree that congressional action is needed to ensure that high complexity laboratory developed testing services and procedures are accurate, precise, clinically relevant, and monitored for continued quality performance largely through CLIA enhancements.

The coalition did not use the AMA/CAP/AMP term, "genomic sequencing procedures" but avoided using the word "tests" in favor of the phrase, "testing services and procedures."

There is a puzzling phrase hinging on the term "clinical commons" -


To the extent tests fall outside of the clinical commons, there should be a limited, well-defined role for the Food and Drug Administration. 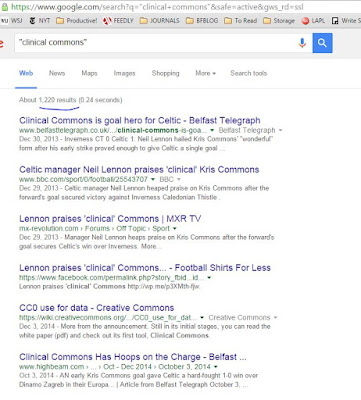