Having held the July 2015 summer CLFS comment meeting on new codes, and having held a special PAMA advisory panel on lab test in late August, on September 25, 2015 CMS released its proposed pricing for new lab tests for 1/1/2016.  Details after the break.

Find the CMS PDF of its proposed positions on the new 2016 codes: Here.

The assignment of new codes into the crosswalk and the gapfill categories can be appealed in writing for 60 days (until about November 24, here).  However, no action will be taken until next summer's July CLFS meeting.

A table of the drug class pricing codes is presented at the bottom of this blog.  For a recent trade journal article, here.

COLOGUARD
The Cologuard test G0464, priced last year, was under appeal for a lower price (an appeal lodged by an unusual stakeholder).  CMS deleted G0464 and applied the same price to new CPT code 81528 for Cologuard.

NEW SINGLE GENE CODES
For a range of new single gene codes, such as 81311 NRAS, CMS agreed with straightforward crosswalks recommend by the August advisory panel.  In one dramatic moment among the single-gene codes, July commenters and August panelists all recommended crosswalking 81314 PDGFRA to 81235, but CMS disagreed with everybody, and crosswalked to 81245, citing a better exon number match.

MAAA TESTS
CMS provided a surprising range of decisions for MAAA codes created by AMA CPT in early 2015 and thus entering the summer gapfill meeting prior to use in 2016.  In separate rulemaking on PAMA published the same day, CMS apparently offered to publish prices of MACs on these sole-source codes rather than (or concomitant with????) putting them into the gapfill process.

CMS jumped from crosswalk to gapfill for the last two MAAA tests:

AMP last winter requested that CMS reconsider a range of genomic procedure codes that are under gapfill in 2015 (now), and reclassify them as crosswalks, and then price them at (fairly reasonable) crosswalks proposed by AMP.    AMP presented on this both in July and August. 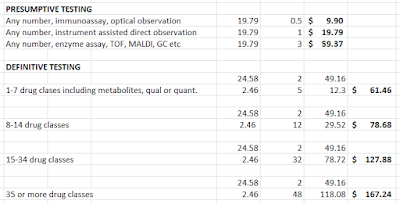 
_____________________
To discuss how the changing healthcare system and Medicare policy affects your company, association, or investments, contact Dr Quinn through FaegreBD Consulting.