On May 25, 2015, the New England Journal of Medicine published six policy papers on genomic sequencing applications, policy, and challenges. 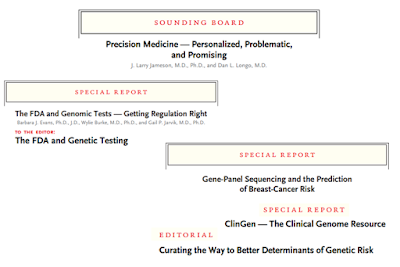 Links after the break.

Three articles circle the topic of clinical variant databases and the expansion in a rolling basis of genes tested:

For a discussion of the six articles in Genomeweb (subscription), here.

An observation -
NEJM sometimes must shorten the titles of longer articles for the "splash pad" on its home page that represents the article.  In the case of Easton's article, they add a striking editorial spin in rephrasing the title - by parachuting in the banner "Caveat emptor" which does not appear in the Eaton article. 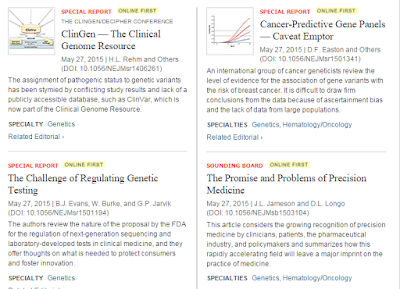 Khoury's article delves into some of the complexities of the million-person sequencing cohort that has been proposed.  For example, what would you do if you find occult cases of carriers of the fatal disorder Huntington's disease?  Khoury and Evans write:

A unique feature of the proposed cohort is whole-genome sequencing of the participants.4,5 Although this will inevitably lead to numerous discoveries and possible interventions, it will take time to yield dividends. In the meantime, there is a real opportunity for near-term benefit by focusing on conditions for which evidence-based applications are already available. The Centers for Disease Control and Prevention has created a 3-tier classification schema of genomic applications based on the methods of evidence-based medicine. REF 5   Similarly, a “binning” strategy for the human genome was proposed based on clinical validity and utility of genes and genomic variants.  REF 6

Examples of tier 1 conditions for which preventive interventions are already available among persons with a predisposing mutation include hereditary breast and ovarian cancer syndrome (BRCA mutations), Lynch syndrome (associated with increased risk of colorectal cancer), and familial hypercholesterolemia. An estimated 2 million people in the United States have one of these conditions and most are not aware of their risk for cancer or heart disease. Once these individuals are identified, evidence-based interventions are available that can reduce their risk of adverse health outcomes. The challenges include how to best obtain consent, educate, identify, and deliver results to such individuals in the population because the implementation of any public health measure also carries risks and costs, as well as potential benefits. For example, although most would agree that identifying individuals at high risk of a preventable condition is desirable, important questions, such as the true penetrance of these conditions when ascertained via a population-based approach, remain to be answered.


This cohort of a million or more people would be expected to include many thousands of undiagnosed, unrecognized patients with a high risk for breast/ovarian cancer, colorectal cancer, or coronary heart disease, identified through genomic sequencing. If identified and properly educated, these individuals and their relatives could leverage established interventions to reduce their risk—an immediate potential benefit from this endeavor. Just as important, the cohort could inform many critical questions that need to be answered before implementing genomics at the population level. Other potential targets may include a carefully selected subset of highly actionable genes that the American College of Medical Genetics and Genomics7 has recommended be analyzed when individuals undergo genome-scale sequencing for other reasons.


For a journalist writing on genomics "hype," see here at Mendelspod commenting on a Buzzfeed article here.

Writing in part:  The average annual cost of new targeted cancer drugs frequently exceeds $100 000 per year. The authors of a recent trial of ivacaftor and lumacaftor for CF pointed out that these new medicines had effects on FEV in the first second of expiration “in the range of the magnitudes of change seen in studies of other cystic fibrosis therapeutics.”These include azithromycin, hypertonic saline, and ibuprofen. [But] Ivacaftor costs $300 000 per year, whereas a 1-year supply of ibuprofen costs approximately $30, and unlike ivacaftor, it can be used by all patients with CF. [refs omitted]


_____________________To discuss how the changing healthcare system and Medicare policy affects your company, association, or investments, contact Dr Quinn through FaegreBD Consulting.