Is the Learning Healthcare System Almost Suddenly Here? From ASCO and MolDX?

2007:  We starting hearing the phrase "learning healthcare system," used as the title of an Institute of Medicine report (here) and rapidly entering the health policy vernacular.  In recent years, the idea has particularly circulating in the context of cancer care, where it's been called the innovative relief valve for "a cancer care system in crisis" (for this 2013 U.S. IOM report, here; for the same idea in Canada, 2015, here.)

However, from one source or another, in 2015 and 2016, the big bang for the learning healthcare system may finally be ready to occur.  For a peek-a-boo, see the Med-C website (here).  Details after the break.

One might still wonder when the traction will occur, but several additional documents provide clues that it may be sooner rather than later. 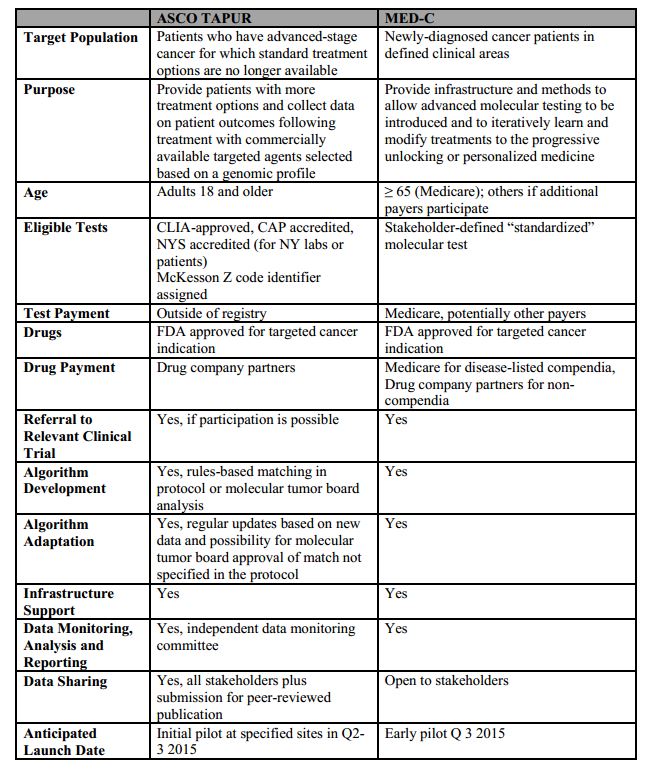 
Whether TAPUR, MED-C, the NCI intiative for targeted NGS trials in lung cancer (LungMAP, here; also here and here) or another initiative really gets the most traction isn't the key thing.  The volume of activity and the number of directions it's coming from... from investments in Flatiron to Friends of Cancer Research to Medicare MolDX to NCI...suggests that many stakeholders are seeing the same constellation of factors lining up.   A rising number of targeted oncology drugs are available.  Patients getting NGS gene sequencing panels will soon number in the tens of thousands.   EHR's, even if imperfect, are real now.   The "transaction costs" for getting and coordinating data are lower.   Finally, the values for pharma are easily imagined.   Although it's not going to be label-quality data, signals from scattered patients nationwide with certain genomic fingerprints and different tumors may flag unexpectedly clear early responses from certain drugs.   These drugs can be lifted out and targeted for  study and information-gathering that will result first in NCCN compendium listing and later FDA labeling.  Equally importantly, the flow of otherwise routine clinical data coupled with genomic informatics will flag drug/gene combinations that don't seem to work at all - and which can be deprioritized from study.   Since drugs are cleared (whether by NCCN or FDA) on a drug-by-indication basis, there is a constrained level of damage from the data being public.   If there's evidence that Drug X is 80% likely to be quite effective in Cancer X, the existing pharma still has a sole source ability to produce Drug X.

There is a lot of value to be generated here, and the missing link is the ability to coordinate and harvest it - problems that should be tractable.  There is so much value here, and it is so close to the surface, that somebody will figure out how to make it work, and sooner than we might have expected just a few years ago.   A train is rumbling around the bend, and from one track or another, it's going to be here soon.

June 2015 update.  For Genomeweb subscription stories on the June launches of TAPUR and NCI-MATCH, see here and here.