Metrics about MOLDX Code Coverage - A Snapshot for January 28, 2015

Recently, I was asked to do an analysis of MolDX coverage by CPT code, and I pulled some of its current data into Excel spreadsheets, available (here; look for small 'down arrow' to download).

Note that MolDX coverage may change at any time, so the cloud spreadsheet just provided represents one day's snapshot of MolDX current coverage and non-coverage webpages.

MolDX has a webpage of "Approved Genetic Tests."  These are tests that are generally well accepted, and coverage for these tests is just reflected by their serial listingby CPT code.   For example, 81235 (EGFR, common variants) is covered here.   (Webpage).  123 genes are listed by name and code as covered.   This includes 63 germline genetic codes below 81400, where the Tier 2 codes start.  In the Tier 2 series, 81400-81409, 60 genes are listed as covered.

In addition to its webpage for "Approved for Genetic Tests" (which tracks to AMA CPT codes), MolDX also has a web page for "Covered Tests" (document M00023).  There are currently 25 listed articles such as "Oncotype DX Colon Coding and Billing" and "Chimerism Testing Coding Guidelines."  (Webpage).

Finally, there is the grim "Excluded Tests" page (here).   Technically, these tests being "noncovered, without an LCD" are supposed to be excluded for statutory reasons such as being "screening tests" or "preventive care" not currently covered.  However, some seem to be excluded because there is "not enough evidence" which seems more like a reasonable & necessary exclusion.  A cloud copy of the Excluded Codes list is here.

In any case, the "Excluded Test" spreadsheet lists 899 excluded tests by name.

Representing a sampling of the 899 excluded tests, there are links to 53 web articles explaining the reasons for exclusion of some of the tests.  Some of the exclusions seem to be circumstance-based; for example, the BRCA1, BRCA2 genes are absent from the MolDX Covered Test list, and these codes are placed on the MolDX Excluded Test list.   Footing to this, a MolDX article (M00107) states that "carrier testing for risk of disease without signs and symptoms is not a Medicare benefit." On the other hand, the Noridian MAC covers BRCA testing in Medicare patients with a personal history of breast cancer.  Noridian lists the BRCA genes on its "covered" rather than its "noncovered" list (here). 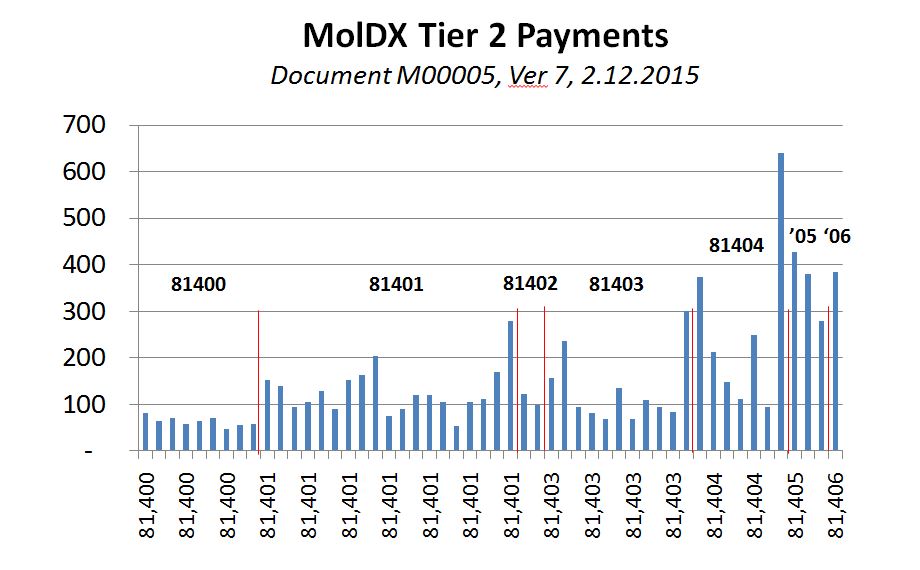