Update [March 25]: Early trade press after MedCAC suggests it went exactly as predicted in this blog many weeks ago.  An advance copy of the transcript is available here.

Details after the break...

SUMMARY: This notice announces that a public meeting of the Medicare Evidence Development & Coverage Advisory Committee (MEDCAC) ("Committee") will be held on Tuesday, March 24, 2015. The Committee generally provides advice and recommendations concerning the adequacy of scientific evidence needed to determine whether certain medical items and services can be covered under the Medicare statute.
This meeting will focus on selected molecular pathology tests for the estimation of prognosis in common cancers (such as, adenocarcinoma of the colon and rectum, breast cancer - invasive duct and lobular cancers, non-small cell lung cancers). This meeting is open to the public in accordance with the Federal Advisory Committee Act (5 U.S.C. App. 2, section 10(a)).
DATES: Meeting Date: The public meeting will be held on Tuesday, March 24, 2015from 7:30 a.m. until 4:30 p.m., Eastern Daylight Time (EDT).

The MEDCAC panel will consider the evidence about molecular pathology tests that estimate the prognosis of several frequently encountered types of cancer, including:
Outcomes of interest to CMS include both beneficial and harmful outcomes experienced by patients from anti-tumor treatment decisions based on results of tests estimating cancer prognosis.
Such outcomes may include, among others: mortality/survival; quality of life; and avoiding harms of anti-cancer treatment. Results of a technology assessment of such tests will be presented.
By voting on specific questions, and by their discussions, MEDCAC panel members will advise CMS about the extent to which it may wish to use existing evidence as the basis for any future determinations about coverage for tests that estimate cancer prognosis. MEDCAC panels do not make coverage determinations, but CMS often benefits from their advice.

Of more interest, the CMS website includes instructions and voting questions for the MEDCAC panelists.  These are listed in full at the bottom of this article.   Tests for voting including Oncotype DX Breast and Colon tests; the Mammaprint breast cancer test; and individual gene tests such as BRAF, KRAS, and EGFR.  Panelists will vote on the evidence for tests as to analytical validity, clinical validity, whether they impact clinical outcomes [for good or bad], and whether they impact clinical outcomes favorably.

The assessment protocol as a whole, however, was puzzling (even bizarre) to some experts, as it focused only on the "prognostic value" of tests such as EGFR and KRAS, which have scant prognostic value per se but rather, are used to choose the correct chemotherapy for the patient.   Having receiving blowback on their draft report, in December 2013, in the final 2014 version the ECRI authors publicly confessed that they knew some of the tests they reviewed had diagnostic value, rather than any prognostic value, but that they were compelled by their instructions from AHRQ to evaluate only the "prognostic" value of the tests -- and to exclude and ignore data for diagnostic or chemotherapy predictive value.  This leads to the over-the-top strange conclusion that a test like ALK has no effect on management or outcomes.

Looking at ALK or EGFR tests but being instructed to ignore their "predictive" value and look only to their "prognostic" value is like asking to look at the clinical benefits of penicillin while excluding any data on its benefits in infectious diseases.

I am unconvinced that the AHRQ contracted authors couldn't have pointed out initially, on receiving the contract, that in significant part, the instructions were miswritten, crazy and made no sense.   If I was asked to write a report on ALK, with the instruction, "studies that evaluate specific diagnostic/therapy combinations are excluded from this report" I would pick up the phone and ask what in blazes is going on - it makes no sense at all.   The trade press is unable to pick up on this point - see "Medicare Advisors Focus on Cancer Tests" in Congressional Quarterly Roll Call, a publication of The Economist, which ought to know better and bring some content knowledge to its biomedical reporting.

I made similar remarks as an open comment letter to the MedCAC committee (here, 2/23/2015.)

The AHRQ report, "Molecular Pathology Testing for the Estimation of Prognosis for Common Cancers" is available here or here (on the CMS website), dated May 2014.  The AHRQ methods guide for "prognostic tests" is also available online, here or here.

Presentations should be submitted February 23, 2015.  (These can also be in the form of a "letter to the panelists" if you don't want to present live.)   Registration to attend closes on March 17 (but register earlier because seats may fill up.) 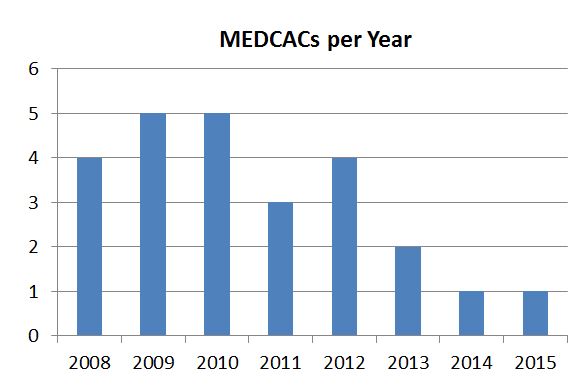 The MEDCAC panel is here; each meeting uses about 8-9 selected panelists from the standing committee and often adds 2-3 guest panelists not on the standing roster, such as an NIH subject matter expert.