Are Health Technology Assessments Good or Evil or is this the Wrong Question?

Often the perspective from industry on health technology assessments is that they are more-or-less evil (on a scale of good to evil).   I was surprised by the high quality, assemblage of facts, and overall astute viewpoint provided by a new 30 page white paper that can be downloaded from The Economist on value based healthcare and its implications for the global drug industry.   (Free with registration). 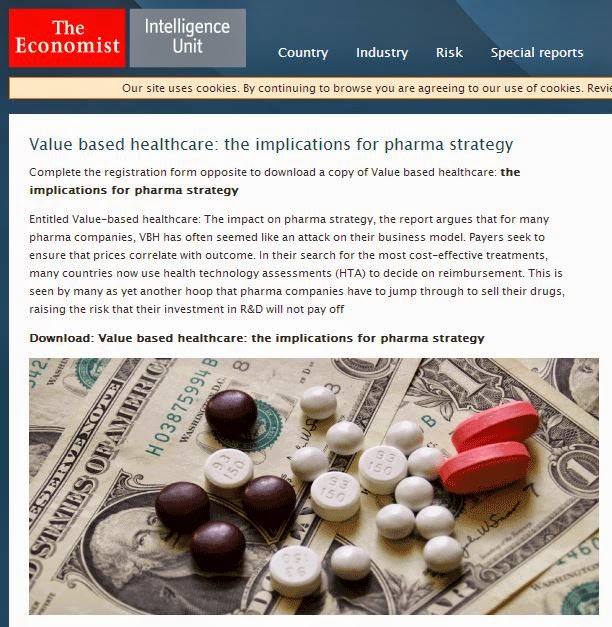 The white paper emphasizes that price cuts, price ceilings, and reimbursement systems for drugs from Singapore to Germany to England to the US all depend on health technology assessments.   (They note, also astutely, that in some countries like Germany the results are painful price ceilings, in the U.S. they are painful copays or other barriers to access.)

In over a decade working full time on healthcare policy, I have seen some pretty dumb logical errors or lame conclusions in health technology assessments.  I have also seen some well-written ones.   I was tickled to run across two authors who take a pretty acute "the Emperor has no clothes" approach to the health technology asssessment industry.   These are Robert E. Ware and Rodney J. Hicks, writing in the Journal of Nuclear Medicine (2011, 52:64S-73S; pubmed).[*]  (See also some letters to the editor in the same journal; pubmed).

In their abstract, Ware & Hicks state the following:

I was reminded of several scathing and wickedly funny pages in the wonderful book, "Therapeutics, Evidence, and Decision-Making," the concise 2011 monograph on evidence-based medicine by Sir Michael Rawlins, until recently the head of NICE in the UK and currently leader of the Royal College of Physicians. Very early in the text - page 4 forward - he writes about those who would make "levels of evidence" hierarchies the alpha and the omega of assessment.  Stating, "[Thomas Kuhn] rejected the idea that there is some algorithm, based on the principles of scientific method, that scientists can use in choosing between one theory and another.   Hierarchies of evidence are such algorithms.  They attempt to replace judgement with oversimplistic, psuedo-quantitative assessment of the quality of the available evidence." He goes on to say that (real) decision makers have to incorporate judgments, including whether an evidence base is "fit for purpose."  I highly recommend Rawlin's book as a great read.[**]   And so is the article by Ware and Hicks.

____
[*] The Ware & Hicks article was part of a 2011 special supplement to J Nuc Med on a range of policy topics.
[**] Amazon here.  See also his Harvey Oration, which appeared open-access in Lancet and in a longer printed form via the Royal College of Physicians which I can't currently find online.