There's been a flurry of journalism over Judge Mizelle's strike-down of the CDC mask mandate.

Here is the original ruling:

Here is the best discussion of exactly what she said and why (second half of article): 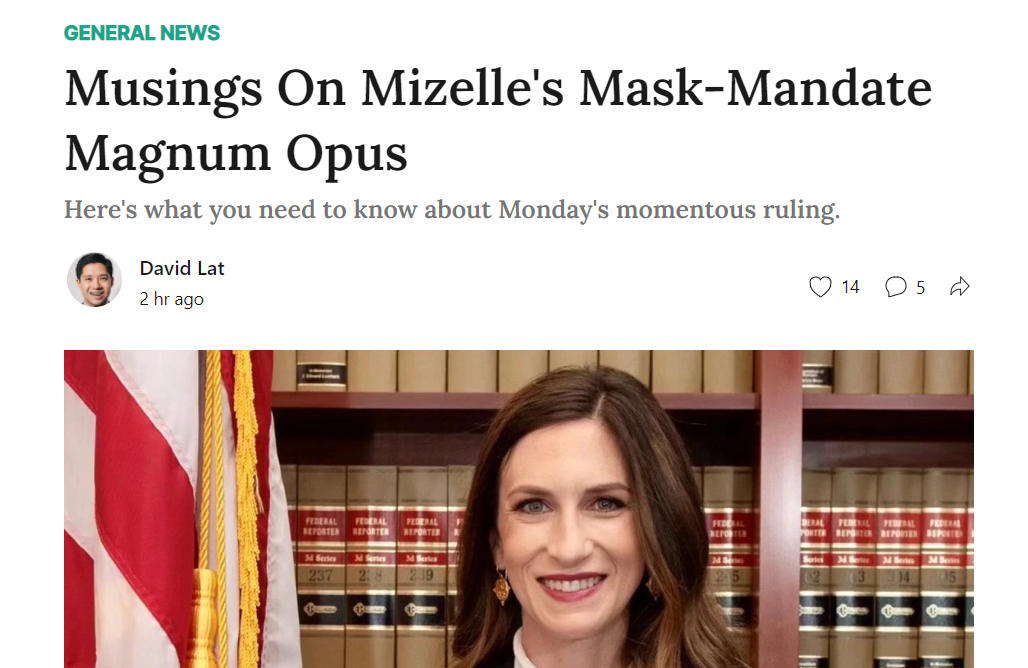 I think the ruling is sort of goofy in some ways, but it's certainly well-written and readable on its own terms.

First, the judge has a long discussion of the exact statutory authority for public health measures (looking up dictionary definitions of terms like "sanitation" and using 1940s dictionaries for the 1940s law.)

Second, she rules that the CDC violated Administrative Procedures Act law, which can be enough to void a regulation.  APA requires at least 30 days public comment, which the agency can skip in exceptional urgent circumstances.   She says the CDC did not do nearly enough to justify, in writing, facts and circumstances for urgency.  In her telling, CDC merely remarked the matter was urgent so it was skipping APA.  She also notes that the CDC could have, but did not, do an easy workaround.  That is to issue an interim final rule (IFR), immediately open 30 days comment, and then close the rule (say, on day 35) as a non-interim aka "final" rule.  CMS sometimes does IFR with comment in this way.  The 35 day period hypothesized here would have run in February 2021 or so, long before the case reached Judge Mizelle in past weeks.

There's also a reference or two to "interstate" conditions.   This is based on the historical basis of many laws on "interstate" powers of the federal government.  She only touches on this and doesn't delve into the implication the CDC could regulate interstate flights but not within-state ones.  Recall that in the Constitution, states were like independent countries that could do nearly everything, except for powers (like declaring war) given over to the federal government by the Constitution.  Thus, current conservative justices might view state mask mandates as state's broad and original rights to regulate themselves (the broad term of art is "police power"), but federal mask mandates require a clear and particular line of delegated constitutional authority (such as to regulate interstate commerce).