The Exception for Pathologists Ordering a Test: Medicare Policy

Generally in Medicare, only the physician who is treating the patient can order a diagnostic test, enshrined at 42 CFR 410.32.

However, there are some exceptions for radiologists and pathologists, and I frequently forget where they are and have to dig them up.  They are enshrined at the Medicare Benefit Policy Manual Chapter 15 - here.  See sections like 80.6.4, Rules for Testing Facility Interpreting Physician to Furnish Different or Additional Diagnostic Tests.

For example, in Radiology, the radiologist may determine things like "the number of radiographic views obtained, use or non use of contrast media."

In Pathology, the pathologist may do additional special stains if "the services are medically necessary so that a complete and accurate diagnosis can be reported to the treating physician."  And the pathologist uses the results and documents their use.

The examples haven't changed in decades.  But pathology has.  It's not just $10 special stains any more.  Today, can this pathologist order a $3500 prostate prognostic test or $3500 breast cancer prognostic test "to finish the case" and provide a complete diagnosis?  Seems unlikely.  But exactly where do you draw the line between the $10 TB stain (enshrined in the manual and A-OK) and the wide gamut of modern tests (e.g. an NGS-based TB test for $150 instead of a TB stain for $10?)  Can a pathologist or radiologist order a supplemental AI-based analysis?  A puzzle for another day. 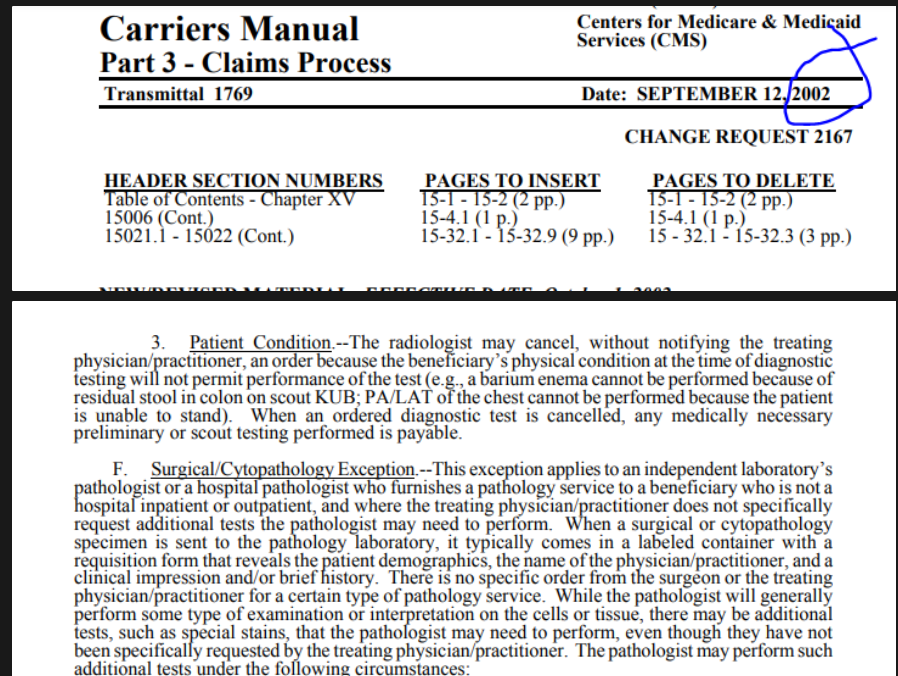 For my uber-nerdy 2012 discussion of regulations for placing test on the pathology/RVU fee schedule vs clinical lab/CLFS fee schedule, see here.  It has to do with 42 CFR 415.130, with reference to additional rules at 415.102(a) which also apply before 415.130 is applied.  The lab test has to be ordinarily performed by a physician, defined as >50% of the time, such as reading a glass slide as breast cancer.  This glass slide diagnosis is ordinarily performed by a physician, not by a lab expert PhD, so it is a "pathologist service."  In contrast, the lab work and report that states you have an Oncotype Dx breast cancer score of "35" is not ordinarily performed personally by a physician, and is not a pathology test, but a clinical laboratory test.  Another area of confusion is "molecular pathology," used without definition in the date of service rule.  In practice, such as in Appendix B of the outpatient fee schedule for hospitals (OPPS APC), CMS defines "molecular pathology" as only human DNA-RNA tests (not microbiology.)  If you look to pub med or google, often "molecular pathology" refers to human DNA-RNA tests, but sometimes, it includes molecular microbiology in scope.  While "pathology" is on the physician RVU schedule, "molecular pathology" is on the CLFS schedule.