This blog is probably near a peak level of Medicare trivia, but it's interesting from the perspective of the MolDx policy system for lab tests, and the heavy concentration of Medicare's mopath spending in California.

It looks like none of the non-MolDx MACs could successfully take on Jurisdiction E, which is being re-bid right now, and take it out of the MolDx policy system.  Reasoning follows.

Jurisdiction E (California, Hawaii, Nevada) Is Up For Re-Bid

Jurisdiction E, one of the largest MACs, especially from the perspective of molecular testing, is up for re-bid.

The federal Request for Proposals (RFP) for Jurisdiction E posted on August 20, 2019, with responses due November 4, 2019.   See website here, solicitation number  75FCMC19R0023.  The anticipated award date for the new contract was posted as August 4, 2020.


(Click through the documents at the bottom of that webpage, 5 at a time, to see the most interesting document, the 150 page statement of work.  On my PC, I had to rename as a PDF-type file to open it.)

See my cloud copy of the national MolDx statement of work here.  Each MAC in the MolDx policy system works with Palmetto under a "Joint Operating Agreement" or JOA; I don't have a copy of that.

Using a table included in the GAO case, I've rearranged the contractors by group.

Novitas can't win California, because it already has 25% of CMS workload, basically at its 26% limit.

NGS MAC has 20% of CMS workload, so it can't add 9.1% for California, which would give it 29%, over the 26% limit.  However, NGS MAC could spin off into two shell companies under one parent company, and then either NGS MAC company (with 7.8% and 12% respectively) could add the 9% JE MAC.

So, taking this as a sort of puzzle, the only way I see that a non-MolDx MAC could win JE is by NGS MAC splitting into two companies (possibly under a parent company, something discussed in the GAO legal case cited) in which case it could win JE.  If that happen, JE might become a non-MolDx MAC.   Check back in August 2020 for the result. 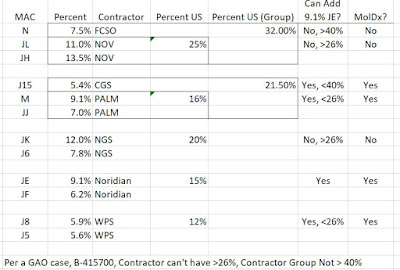 If you subtract the $118M of payments for Exact Sciences Cologuard, which are paid (1) under an NCD and (2) in a non-MolDx state of Wisconsin, then there are $470M national mopath payments controlled by LCDs, of which $408M or 87% are in MolDx states.

If a MAC other than Noridian wins the JE contract, it could go into legal appeal cycles of many months.   We know the JE deadline for applications was November 2019; we know the award date is August 2020.  I believe that's the go-live date, since I recall the contract review only requires a matter of months.   I would expect an announcement of the winner in early spring 2020 and a "go live" date (not just an announcement of the winner) in August 2020.

If a MAC other than Noridian wins the JE contract, it could trigger LCD "stasis" for 6-9 months due to a required harmonization process that suspends issuance of new LCDs.