On October 30, CMS issued its final rule for the hospital outpatient, or "OPPS," fee schedule for CY2016.  (Full listing here).

Regarding molecular pathology, CMS has finalized its plan to treat genetic tests and DNA/RNA MAAA tests differently than it treats protein-based MAAA tests.  For extra confusion, CMS treats some protein-based MAAA tests differently than others.
Beginning almost two years ago, in January 2014, Medicare bundled almost all clinical chemistry tests ordered and drawn in the outpatient setting.  This includes hospital-based patient clinics and certain cases where outlying physician clinics have been acquired by hospitals and operated as "satellite" locations.  Clinical chemistry tests are paid separately (aka escape bundling) only on the very rare condition that the test was ordered by a different physician for a different purpose than the primary visit or surgical procedure that brings the patient to the outpatient setting.  Hospitals can flag such rare events by the modifier L1 on the claim line for the lab test.

CMS made a special exception that keeps genetic tests outside this test-bundling rule.  For lab tests that fall in the CPT code range for single gene genetic tests (such as BRCA or KRAS), CMS assigns the traditional status indicator "A" which means they are simply paid the historical way on the Clinical Laboratory Fee Schedule for lab tests.  CMS, on its own volition, assigned new GSP or genomic sequencing procedure codes to status indicator "A."

This year, in July 2015, CMS proposed to also excluded from bundling MAAA codes, but only if they were for DNA or RNA based MAAA tests.

For protein-based MAAA tests in the hospital outpatient setting, CMS assigned those tests (in either the Administrative Code MAAA series or the CPT Category I MAAA series) to "Status E" implying they were not payable by Medicare.

But, throwing the stakeholders a bone, or actually, two small bones.

CMS said it would assign the protein based MAAA tests to status indicator "Q4."

For a list of all the CMS status indicator definitions, in the cloud here.  The relevant definitions are here:

Status A: Separately payable CLFS tests, not subject to deductible or coinsurance.
Status E: Not paid by Medicare when submitted on outpatient claims or bill types.  May be not covered in any outpatient benefit category, or statutorily excluded, or, not reasonable and necessary.
Status Q4: Paid under OPPS or CLFS.  (1)  Packaged APC payment if billed on the same claim as a HCPCS code assigned published status indicator “J1,” “J2,” “S,” “T,” “V,” “Q1,” “Q2,” or “Q3.”
(2)  In other circumstances, laboratory tests should have an SI=A and payment is made under the CLFS.

If all the MAAA tests are reviewed (from 0001M to 0010M and from 81490 to 81599), CMS has variably assigned MAAA tests to one of three different status indicators A, E, or Q4.   "A" is rare for laboratory tests and means the test has a special exemption to always been paid to the hospital on the CLFS, no bundling rules applied.   "E" is the worst status, meaning not payable on a Medicare outpatient hospital system fee schedule (including CLFS).   In between is "Q4," which is the status of almost all clinical laboratory tests, meaning that they are bundled except under the most rare rare circumstances (different order, different MD, different purpose).

CMS seems to have systematically assigned the DNA or RNA based MAAA tests to "A" whether they appear in the "M" series MAAA codes or in the Category 1 MAAA codes.   And as CMS promised to do, it put the four named protein-based MAAA tests in to Category Q4 (like clinical chemistry tests; 81490, 81535, 81536, 81538.)   However, even following Medicare's own stated position, it seems inconsistent that other protein MAAA tests (like the 4KScore test, 0010M and the Ova1 test, 81503) remain Status E rather than Q4. Now that most MAAA tests have CPT codes, it will be much easier for hospitals to bill them to the hospital's local MAC, even if the test is performed in a remote location.   The 14 day rule doesn't forbid billing for outpatient tests that are Status A, it just requires the hospital to bill and not the laboratory.  For example, if it wants to, St. Mary's Hospital in Indiana can now perform an outpatient lumpectomy on Monday, Fedex the Oncotype DX test to be performed in California performed on Wednesday, and bill it to CMS locally with CPT code 81519 at CY2016 fee schedule price $3416 on Friday (with date of service the same as tissue biopsy, Monday).  However, the hospital can't ever do that for a MAAA test which is category E, and can virtually never do that for a MAAA test which is category Q4. 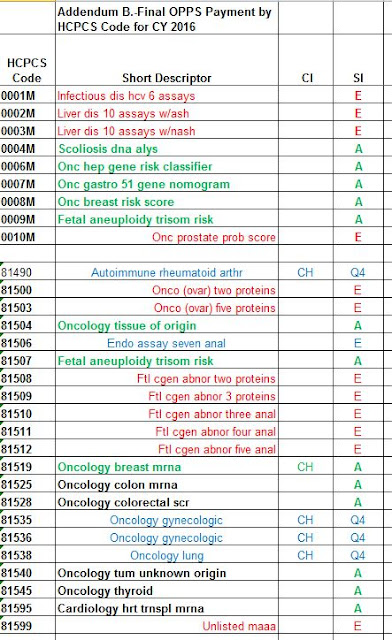