Does the OIG's "Extend The DRG" report make no sense, or did I miss something?

In February 2014, the OIG published a report whose whose title seems to clearly predict its content:  "Medicare and Beneficiaries Could Realize Substantial Savings if the DRG Window were Expanded."  (For a brief summary of the 32-page document, see this blog.)

The report notes that a pre-admission bundling policy currently exists for hospital services within a three day window and provided by the same hospital.  For three days before a DRG inpatient admission, services of the very same hospital are considered bundled (these might typically be emergency room services or pre-surgical laboratory tests).  No post-discharge services are overtly bundled, but a quirk for clinical laboratories called the "date of service rule" blocks additional payment for tests performed on samples taken while the beneficiary was an inpatient.

What is being proposed?
The OIG notes that these windows could be substantially widened - say, to ten or fourteen days before admission  - and the bundling could also be applied to to services by any related hospital (in the same network).  (It would be more difficult to apply them to any hospital anywhere, and there would be the puzzle of deciding which services were "related to" the future, ten-days-off admission event.)

Money?
The report noted that $263M in services were provided within 11 days prior to the DRG window, somewhat bunched up around 4 or more days prior to admission (just before the current DRG window takes hold).   Another $50M in services are provided by "affiliated" hospitals with shared ownership, but which are not actually the same hospital (or owned by the same hospital) where the beneficiary is admitted.

Has anybody thought of this before?
OIG notes (pages 4-5) that it recommended wider windows in 1994 (a 7 day pre admission window) and in 2003 (a 14 day window for 10 DRGs).   As in the past, OIG stated that CMS both can and should seek legislative authority for its proposed changes.

This time, CMS responded to this third report in a twenty-year series, stating rather obliquely that it would have to seek legislative authority to implement the proposed changes (is this an answer, or an echo?) and further, that the requested DRG bundling changes were not proposed in the White House budget plans.   OIG responded that CMS could seek legislation not proposed or envisioned by the White House.

Why the reader gets increasingly puzzled as he approaches the end
Admittedly, this is the Office of the Inspector General and the math whizzes who took accounting classes and algebra are over at the GAO - the Government Accountability (formerly "Accounting") Office.   To a first blush, the changes would not save $100M or $200M but rather be revenue neutral, as the charges for the services would now be baked into the larger annual DRG calculations rather than paid on a fee for service basis.  Read carefully, the current OIG report seems to stop short of saying that the numbers quoted here are savings, but rather they are observations of the amounts being paid before the DRG starts.  On the other hand, the OIG, in thirty pages of report, does not bother to explicitly say that much of the savings would be absorbed under the blanket of budget neutrality.

The reader is left with the report's bold title - Medicare could realize "substantial savings" with the pre-admission DRG window being expansion - but no actual amount (after bundling, cost-neutrality, and truing up) is found anywhere in the report.

Your government at work. 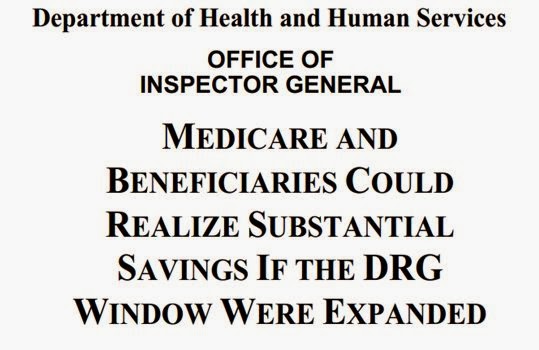