The November 2021 issue of CAP TODAY includes a cover story by Karin Titus on the sharply growing role of molecular classification in the diagnosis of brain tumors.   Molecular testing has become critical for major decisions both in tumor classification (tumor type) as well as in tumor grading.

Genomics are used for classifying types of brain cancer (e.g. two major and different lines of astrocytomas) as well as tumor grading.  Methylation patterns are also rising in importance for tumor classification.   Great news for molecular pathology and for better patient diagnostics.

Worth thinking about the policy and patient care implications.  The article, which features comments from Arie Perry of UCSF and Daniel Brat of Northwestern, notes that a new CAP guideline for brain tumor testing will appear shortly in Arch Pathol Lab Med.  The article is based primarily on the recently completed 2021 WHO guidelines for brain tumor diagnosis and classification. 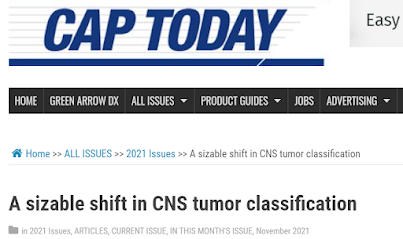 Brings back some memories for me; I'm a board certified neuropathologist and served on the Northwestern faculty 1997-2001 before moving into business positions.