The 2016 Kort vs Burwell Court Case: Defining Reasonable and Necessary in NCD's


On October 3, 2019, President Trump signed an executive ordering requesting about a dozen activities from the Medicare program (see blog and further links here).

CMS Has Tried Before to Define R&N

It's notorious among CMS experts that the agency has tried to "define reasonable and necessary" several different times, going back decades.  With Felix Frueh I co-authored a paper on the related topic of "defining clinical utility" in 2014 (here; online PowerPoint and video course here).

A good Medicare trivia question would have the answer that one of the attempts to "define reasonable and necessary" in the 80's or 90's in regulations ended up as manualized language embedded inside the CMS manual for LCD's.  (See LCD guidance from CMS at bottom of this blog).

An excellent book that profiles the history of coverage decision-making in Medicare back to the 1960s, and with a full chapter on the Kort case (below) is:  Maschke & Gusmano, Debating Modern Medical Technologies (2018).  For more on the book, here.

Very relevant is the 2016 court case Kort v Burwell, in the cloud here.   CMS has several NCDs about PET scans, one of which allows FDG-PET to be used in ambiguous cases of frontotemporal dementia versus Alzheimer's disease.   Another blocks payment for the use of Beta-Amyloid PET (e.g. AMYVID) except in RCTs under coverage with evidence development.

KORT took the agency to Kort on several grounds.  First, the agency should not require outcomes evidence for the diagnostic test, since diagnosis alone was enough (reasonable and necessary for diagnosis OR treatment, not necessarily both).   Second, a regulation for diagnostic tests only required they be ordered by the treating physician (42 CFR 410.32).   Third, CMS covered FDG-PET, which has similar enough performance and data, so it is unreasonable and inconsistent to "non-cover" Amyloid-PET.

Judge Amit Mehta ruled on all three issues.   First, CMS could require outcomes evidence in making a coverage decision on a diagnostic test.   It was an implied authority from statute and not an unreasonable breach or an entry into a forbidden area of authority.   Second, the regulation requiring tests be ordered by the treating physician was an ENTRY to reimbursement; this regulation did not imply and was never intended to imply that any test so ordered was covered.  Third, the judge found that the diagnostic evidence for accuracy and the lack of outcomes evidence for witnessed improvements in health was similar enough for the FDG PET NCD and the Amyloid PET NCD that this issue was remanded back to CMS for further consideration.

In follow-up to the third action item in Kort v Burwell, CMS published a 5-page public explanation of why CMS covered FDG PET for Alzheimer differential diagnosis, but not Amyloid PET.  See CMS document 3353-N, 83 Fed Reg 15572-6, April 21, 2018.  Here.  Interestingly, Alex Azar, who was probably battling to get Amyvid covered during its NCD applications as General Counsel of Lilly, was Secretary of Health at the time the non-coverage explanation was published in 2018.

CMS said the two NCDs differed due to (1) the type of assessment (result) the test provided, (2) predictive value including false positives and negatives, and (3) strength versus weakness of relevant expert consensus panels.  CMS shows why the differences were sufficient to lead to two equally rationale, but contrary, NCDs.

R&N decisions are based on "to what degree the agency is confident that the intervention [test] will improve health outcomes in beneficiaries."  Whether use of the test to guide patient management imrpoves health outcomes "also referred to as clinical utility."  Analytical accuracy and clinical validity are considered as well.   The agency devotes substantial concern to whether amyloid testing has too many false positives (the test is analytically correct, the brain has amyloid, but the patient does not have Alzheimer's.)  An expert panel on FDG had strong consensus in the early 2000s, two available panels on Amyoid circa 2013 did not agree.  CMS found there was not strong evidence to support either the favorable or unfavorable opinion (e.g. lack of clear evidence "to support or refute").  (Of course, if there was clear evidence to refute an expert panel opinion, presumably the expert panel would not have that opinion.) CMS relied on "the totality of evidence" as well as the lack of expert agreement.

The Federal Register article cited above is quite a bit more structured, rational, logical, and clear than most NCDs are.  If there was one point I think they miss, it is that the FDA trials for accuracy were done either in clean controls or in known Alzheimer patients.  The target population for clinical practice is a more difficult and intermediate group, those with uncertain and early and difficult to categorize symptoms.  It would be misleading to characterize accuracy data (TP, TN, FP, FN) in an artificial population of very clean case or advanced (autopsy) AD cases, and then suggest that accuracy would apply to a clinical population which by definition is in a border zone between the two extreme states.

Since CMS decisions are clearly stated to rely on level of uncertainty, probably relevant to CMS coverage decisions is an FDA 2019 guidance on dealing with uncertainty in risk benefit decisions, here. 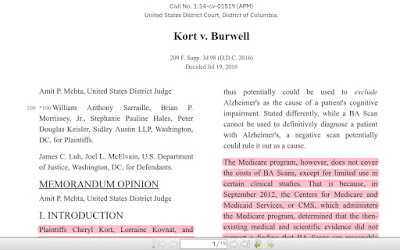 The following text in the current CMS online manual for LCDs (here) originated in a legalistic Federal Register attempt to define reasonable and necessary, probably dating back to the 80s or 90s:

Contractors shall determine and describe in the LCD the circumstances under which the item or service is reasonable and necessary under 1862(a)(1)(A). Contractors shall determine if evidence exists to consider an item or service to be reasonable and necessary if the contractor determines that the service is:
• Safe and effective;
• Not experimental or investigational (exception: routine costs of qualifying clinical trial services with dates of service on or after September 19, 2000 which meet the requirements of the Clinical Trials NCD are considered reasonable and necessary); and
• Appropriate, including the duration and frequency that is considered appropriate for the item or service, in terms of whether it is:
o Furnished in accordance with accepted standards of medical practice for the diagnosis or treatment of the patient's condition or to improve the function of a malformed body member;
o Furnished in a setting appropriate to the patient's medical needs and condition;
o Ordered and furnished by qualified personnel;
o One that meets, but does not exceed, the patient's medical need; and
o At least as beneficial as an existing and available medically appropriate alternative.

For some additional online links regarding Kort v Burwell: