On April 30, 2019, Margot Sanger-Katz at NYT highlights the wide (or wild) discrepancies in payment rates for common lab tests.  Article here.
The NYT article is a window into data published by the "Health Care Cost Institute" - here.  For example, prices for a comprehensive 14-analyte metabolic panel (80053) range from about $10 to $1000.  Sanger-Katz emphasizes this aren't charges, but paid prices in actual data across a range of real insurers.  One of the take-home lessons is that some cities have narrow price bands (Knoxville, Cleveland) and others have crazy-wide price bands (Boston, San Francisco). 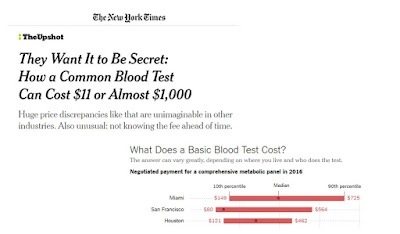 You Saw This in PAMA Nationwide Lab Price Data

New CMS CLFS PAMA prices became effective in January 2018, based on reported private payer data (reported by labs) in 1H2017 and released by CMS in September 2017.    While CMS released summary median price tables, they also put the full reported lab data into a giant cloud data archive that can be searched online.

This CMS data showed all the payment rates, for every lab test reported, so with a little effort, you could see similar data to the NYT article this week, in September 2017 for free on the CMS website.

It takes a little practice to use it (see the FILTER tab and then use the EXPORT tab) but the CMS PAMA raw cloud data is here.