FDA"s Commissioner Scott Gottlieb is also active in public forums at promoting drug price competition.  This weekend, he released an elaborate 20-tweet "Sunday Tweetorial" on all the efforts he's promoting at FDA to increase U.S. drug price competition, here, by speeding the entry of generics.   Historically, and in most cases, prices fall once there are several generics in a market. 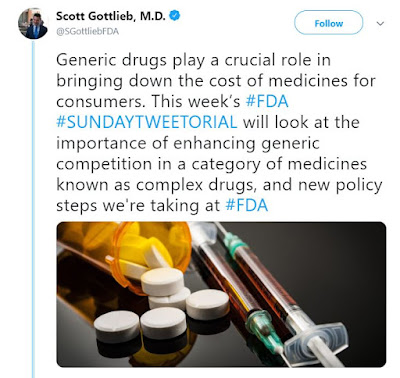 Interestingly, given the rising billions of dollars in biologicals, the Biosimilars Competition Act received an "unofficial 10 year score" from CBO of only $100M, according to one source, here.  See the July House version HR 6478  here.   FDA Law Blog here.

The day after Sunday's Tweetorial by Gottlieb, CMS released proposed regulations requiring advertisements to include drug pricing information, if they are drugs that are covered under Medicare "directly or indirectly."   Since this is directed at consumer ads, it is a bit surprising to see it as falling under CMS's legal authority rather than e.g. some other part of HHS or the FTC.   Here is a trade journal article and here is the 42 page draft regulation in PDF.  The regualations on price advertisement would be tucked among other CMS regulations at 42 CFR 403.1200ff.

CMS dives directly into a discussion of whether it has authority to regulate content of TV ads because it pays for drugs.   CMS notes that Section 1102(a) of the SSA allows CMS to make "such rules and regulations...as may be necessary to the efficient administration of functions" under the SSA.   Section 1871(a) allows CMS to "prescribe such regulations as may be necessary to carry out the programs."  CMS "has concluded that the proposed rule has a clear nexus to the Social Security Act."   They note that CMS spent $174B in 2016 on Part B & D drugs, and $64B on Medicaid drugs.  This $238B was 53% of $448B spent on "retail and non retail" prescription drugs.