Since they are viewed as powerful and ominous by some stakeholders, it's interesting to see their Twitter feed.  After the break.

IQWiG is powerful in biopharma becauses of its linkages to Germany's strict drug pricing law based on comparative effectiveness (including against generics); this law is abbreviated AMNOG (roughly, pharma new market pricing law).  For an overview published at ISPOR, see "German IQWiG: It's not NICE benefit assessment in Germany" here.

Most of the IQWIG website and most work products are available in both English and German.  Here.

But that's not all.  It turns out that IQWiG tweets regularly, most often in its native German, but sometimes tweets on the same topic alternate in German and English.  (See here).

Amongst the twitters, after scrolling around I discovered a four-tweet hashtag, #iqwigdialog."  This hashtag hasn't exactly gone viral: #iqwigdialog has a total of four tweets.  Here.

The hashtag is about "IQWiG im Dialog" which seems to be an annual event for/from/about IQWiG.  The most recent festival being June 2015.   Homepage for "IQWiG im Dialog: 2015," with five or six deck links, here.   The June 2015 workshop or symposium was focused on the theme of: comparing regulatory vs reimbursement authorities in Europe.

The several detailed speaker decks on the webpage are all in German only, but together give a remarkably insightful view of how outsiders view IQWiG.  For example, Daludia Nicola of Lilly and Friedhelm Leverkus of Pfizer present a deck titled, "Confirmatory Utility Valuations?  HTA meets EMA: Methodological Tension Zones [Spannungsfelder] from the Industry Viewpoint" (23 slides, here).

If anyone wanted the German equivalent of our English "clinical utility," it appears to be "Nutzenbewertung." 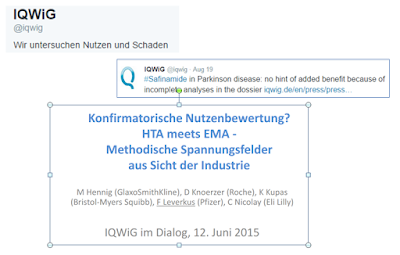